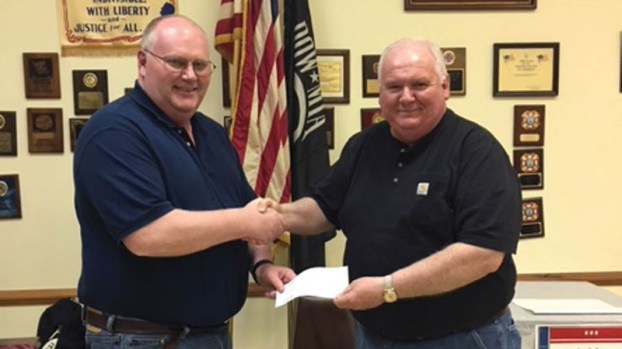 Contribution to pay for this year’s event, future costs

A local businessman has made a sizeable donation to this year’s Ironton-Lawrence County Memorial Day parade.

Rich Donohue, owner of Central Hardware and Rax Restaurants in the region, presented a check to Brent Pyles, grand marshal for this year’s parade, which came from proceeds of custom CASE pocket knives and commemorative glass tumblers sold at his businesses.

According to Lou Pyles, of the parade committee, Donohue designed the merchandise to help offset costs of this year’s festivities and to sustain the future of the parade.

Donahue’s total donation is $3,000, which also includes knives, glasses and wooden nickels to hand out at the parade, as well as commemorative postage stamps, she said.

The parade, which celebrates its 150th anniversary this year, draws tens of thousands to the city each year. This year’s event is set for Monday at 10 a.m.