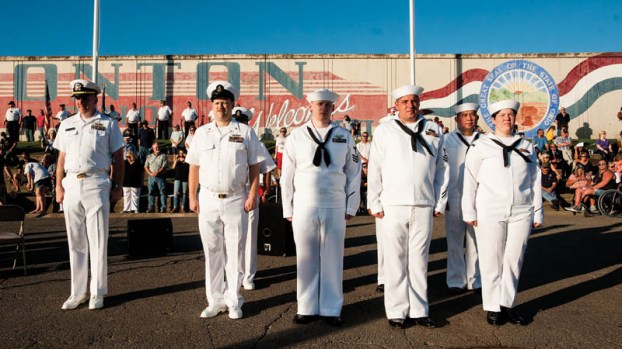 U.S. Navy sailors stand at attention during the placement of a memorial wreath at the Navy Night Memorial Service Thursday evening.

The event, to honor those lost at sea, was held at the Third Street Landing overlooking the Ohio River.

“It’s a nice night for this, which can worry you at times,” he said. “Especially if you were here last year,” when it was overcast with a threat of rain.

This year, it was sunny and warm but a breeze cooled things a bit.

After an invocation by pastor Bob Bradley, Cooper asked all the veterans in the gathering of 150 or so to stand. About a dozen people stood up to the applause of the crowd.

She said it was an honor to be the mayor during the 150th year of the Ironton-Lawrence County Memorial Day Parade.

She said she was in awe of the freedoms we have because of the soldiers, and the families that stood with them, so they could go to the frontlines.

“There is nothing impossible in this great United States that we cannot achieve, if we put our hearts to it,” she said, adding she was proud to stand with the parade committee that has helped put on a parade for 150 years to honor those who served in the military.

The main speaker of the event was Lt. Commander Anthony Strother of the U.S. Navy.
Strother, originally from Florida, was commissioned in 2005 after taking ROTC in college.

In 2009, he transitioned from the U.S. Navy to the Naval Reserve. He is now the commanding officer of Navy Operational Support Center in West Virginia.

He pointed out that those in the Naval Reserve work in the communities they live in but serve when their country calls on them.

“It is an absolute privilege to work with these citizen-sailors,” he said.

Strother said it was a privilege to recognize those fallen American heroes of every generation who gave their lives in service of their country.

“A key component of our nation’s greatness lies in our ability to remember, and honor, the countless men and women who have died while serving in the military,” he said, adding he wanted everyone to remember those who were wounded in the military and those who are now deployed around the world “protecting and defending America’s freedom on the world’s oceans.”

After he finished speaking, Boy Scout Troop 106 had a procession down the boat dock to a Lawrence County Sheriff’s boat to hand off the wreath to waiting officers. They took the wreath into the middle of the Ohio River and placed in the water to honor all those lost at sea.

Ironton VFW Post 8850 did a 21-gun salute. Taps was then played, ending the annual event.