Ohio announces 56 sites where medical marijuana will be… 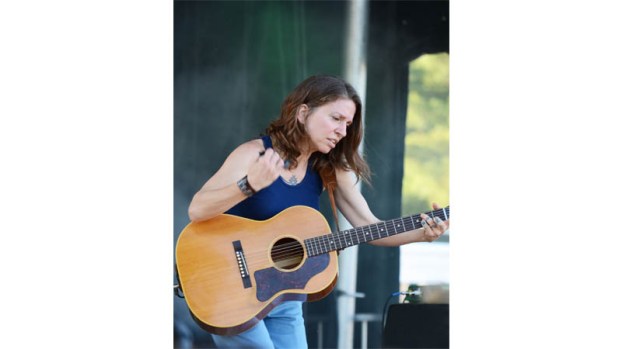 Singer/songwriter Ani DiFranco performs at the Nelsonville Music Festival, on the campus of Hocking College, on Sunday.

DiFranco closes out 4 days of music

NELSONVILLE — “But we just got here!” Ani DiFranco exclaimed, realizing she was nearing the end of her two-hour setlist.

The singer-songwriter was the final act on the bill, closing out the fourth day of the annual Nelsonville Music Festival, which brings dozens of bands to the campus of Hocking College and has grown into one of Ohio’s premiere music events.

DiFranco, 47, who built a massive following in the 1990s, is known for her distinctive, frenetic guitar playing and her politically-charged songs.

As DiFranco’s fanbase and fame grew in the 1990s, she was courted by several record companies, but refused to sign to a corporate label, instead releasing her work, which now comprises 21 studio albums, on her own Righteous Babe record label, based in her hometown of Buffalo, New York.

For her acoustic performance on Sunday, her band was comprised of a drummer and bass player and the trio performed cuts from her latest album, “Binary,” released in 2017. She also leaned heavily on popular cuts from her 1990s albums, including “Gravel,” “Little Plastic Castle,” “Anticipate” and “32 Flavors.”

DiFranco’s performance was part of the typically eclectic line-up of the festival. She was preceded on stage Sunday by Grammy-winning Gospel group The Blind Boys of Alabama.

Headlining Friday night were indie rock The Demberists, while topping the bill Saturday and leading the festival was legendary funk musician George Clinton and his band Parliament Funkadelic.

Booking a date with Clinton, 76, was a major coup for the event. He recently announced that he will be retiring from touring, after a career spanning more than five decades.

The Nelsonville Music Festival is organized by Stuart’s Opera House and, since its launch in 2005, has attracted artists such as Willie Nelson, the Flaming Lips, Wilco, Jenny Lewis, George Jones, Randy Newman, Emmylou Harris, Neko Case and Courtney Barnett. In addition to the headliners, the festival puts a major focus on attracting local and regional bands, as well as artists for the displays on the grounds.

The line-up for next year’s festival will be announced in January.