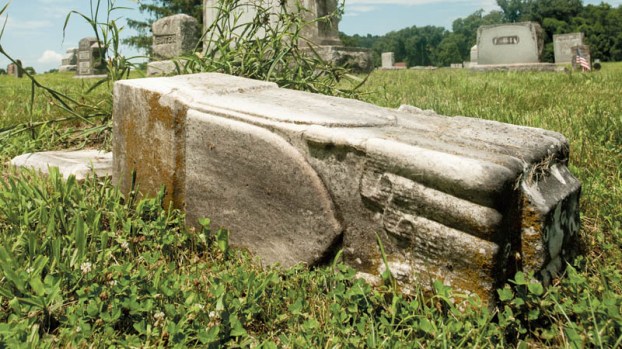 One of the older tombstones at the Rome-Proctorville Cemetery that were knocked over by two 15-year-old vandals on June 28.

Vandals may have to help at cemetery

ROME TOWNSHIP — A pair of boys who vandalized the Rome-Proctorville Cemetery may have to do 200 hours of community service at the same place they wrecked on June 28.

That’s fine with the cemetery’s board of trustees’ president, Carl Bowen.

“If they get community work hours with us, that is fine,” he said. “We have a caretaker that will oversee them. And we certainly have a lot of fencing to paint. We have a lot of granite that can be polished and cleaned. We have a lot of paint and a lot of rags to clean with. So we can keep them busy for the 200 hours, without a doubt.”

While the two boys, who have been charged with vandalism, have yet to have their cases heard in the court of Lawrence County Probate-Juvenile Judge David Payne, Bowen said that he thinks doing community service in the place they wrecked would be a fine sentence.

“They did the damage, they can come back and improve it,” Bowen said.

He said for about five days, they had to deal with a situation of families coming in to see if their loved one’s tombstones had been knocked over.

“Emotionally, it just tore a lot of people up when they saw theirs was affected,” Bowen said. “It was really sad.”

The cemetery caretaker found on June 29 that someone had knocked over 26 headstones from their bases, torn up plants in a garden area and knocked out floodlights. Two 15-year-old boys from the Rome-Proctorville area were arrested by the Lawrence County Sheriff’s Office on July 6 after a review of surveillance footage in and around the cemetery and with tips from the public.

Volunteers helped the cemetery workers repair the damage and the trustees got a monument company from Huntington, West Virginia to put the headstones back in place by the next Thursday morning.

The damage is estimated to be in excess of $2,500 and Bowen said they expect full restitution.

“We will do whatever we have to do to see that is done,” he said, adding that they would pursue a civil case if necessary.

Bowen, like most in the community, was very upset with not only the vandalism, but that it was done at the final resting place of their relatives.

“The cemetery is a sacred place and it should be treated with respect,” he said. “What these boys got out of going through and destroying monuments is beyond me.”