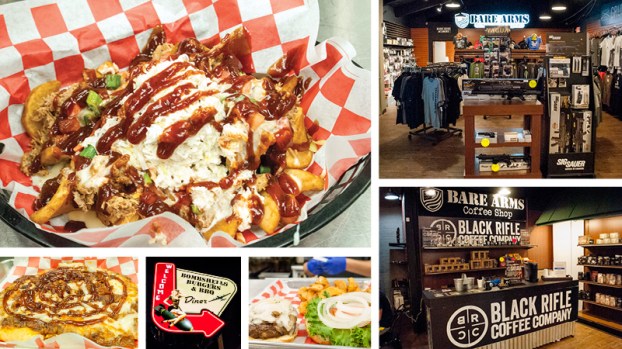 Located inside Bare Arms indoor range and gun shop in Huntington is Bombshells Burgers and BBQ, a restaurant specializing in burgers and smoked meats with a World War II theme. (Photography by Rachael Layne)

HUNTINGTON — Located inside Bare Arms indoor range and gun shop in Huntington is Bombshells Burgers and BBQ, a restaurant specializing in burgers and smoked meats with a World War II theme in honor of Hershel Woodrow “Woody” Williams, of Ona, West Virginia. Williams is the second oldest living recipient of the Medal of Honor.

“We opened the restaurant on June 18, 2018. We made it a 50s diner theme dedicated to showing appreciation to the military in World War II,” Christy Bare, one of the owners along with her husband, Billy Bare, said. “Bombshells are the girls that were on the noses of fighter planes in World War II, and we have pictures of them on the walls. We built the entire restaurant and what it’s about around Woody Williams, and we have a picture of him and pictures of other World War II veterans up on the walls as well.”

Christy Bare said that although the restaurant has been very successful, what it is today is not what it was originally thought up to be.

“We first had the Bare Arms shooting range in Ashland and decided to open another one in Huntington because we had so many customers coming from there. And we noticed so many customers who would go out to eat before or after using the range. We wanted to be able to offer food here,” she said. “In the beginning, it was just supposed to be for people to be able to get something quick to eat while they were there shooting. But now, so many people just come here to the restaurant to eat that wouldn’t usually shoot or have any interest in going to a gun shop and shooting range, but it does bring new people into the range. We never thought the restaurant would turn into what it is today. It’s busier than we ever thought it would be, but we’re doing our best to keep up with the amount of customers we have. It’s been very successful.”

Bare said that one of the reasons she believes people like Bombshells so much is because of the quality of meat and food that people will get at the restaurant.

Bare said that she made the menu and put together the kitchen with head chef Teay McCoy, after visiting several restaurants in the Cincinnati area to use as guides. Another staple in the Bombshells kitchen is Erich Siebel, who is in charge of all of the meat.

“He comes in around 4 a.m. every morning getting things on the smoker. He’s like the backbone of the kitchen,” she said. “We make everything from burgers to brisket to pork butts (pulled pork). We use the meat from the smoker to do sandwiches and specialty pizzas as well. Teay (McCoy) helped me with the menu to make all of the meats work, and his specialty is pizza, so we do pizza, tacos and nachos with the pulled pork also.”

On the gun side, Billy Bare said that Bare Arms is an all inclusive gun store and range that offers everything in one place.

“It’s a one stop shop. People can buy guns here, they can get training and advanced training here,” he said. “And we educate on gun safety and what are the best types of guns to get for different situations; carry, home defense, sport shooting.”

Billy Bare was a police officer in Ashland, Kentucky, where he and Christy still reside, for 22 years before retiring and opening up Bare Arms in Ashland and then in Huntington.

“You don’t need a membership to use the range, you don’t need a CCW, you don’t need to buy our ammo or anything, you can just rent range time,” he said. “We want people to come out and enjoy shooting and to learn or get better. It’s also a great stress reliever.”

He added that for those looking to get their CCW, Bare Arms is a great place to do so for people in Kentucky, Ohio and West Virginia.