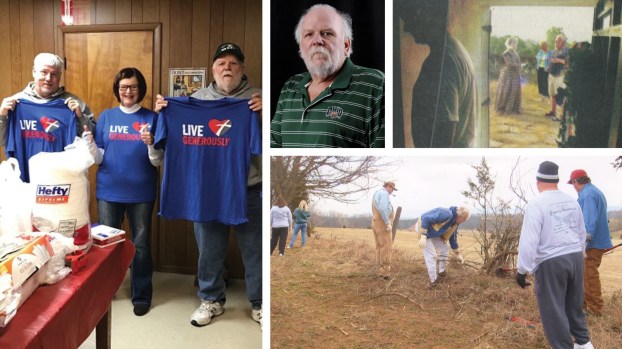 A tribute to ‘Captain Call’

Editor’s note: Bob Leith is a retired history professor at Ohio University Southern. He wrote this piece in honor to his former colleague Steve Call, the director of travel and tourism at the school, who died on June 13.

During my 46 years as a university instructor at the University of Rio Grande and Ohio University Southern, I was privileged to participate in over 25 history field trips.

At Rio Grande, I had to do everything for these trips myself. When I came to Ironton, I teamed up with Steve Call for some extraordinary educational experiences.

I visited the Pilgrim settlement at Plymouth, Massachusetts in the north, Rodriguez Canal in New Orleans in the south, Vicksburg on the bluffs of the Mississippi and colonial Jamestown in the east.

Steve Call probably coordinated around 20 of these history field trips. He secured the bus and driver, registered our people at motels, had meals at historic sites awaiting us, and paid entry fees to historic sites. He built in well-timed restrooms stops and supplied soft drinks, cookies and other snacks en route.

I selected the historic area to visit, wrote the course syllabus, lectured on bus en route and explained the “what, who, when, where and why” at sites where we had no tour guides (to keep costs low). We usually congregated on campus at 11 p.m. and rode through the night, ate prearranged breakfasts and toured each day from 9 a.m. until 4:30 or 5 p.m. The trips usually lasted from Thursday nights until Sunday evenings.

After the trip, we held “Friday seminars” to prepare our students for the course exam and letter grades of their choice.

Steve was the “Father of the History-Mystery Trip.” We would register our students and put them on a bus, without telling them where we were going. At timed intervals, we would offer historic destination hints and award prizes to those individuals who guessed our destination.  We usually transported 35-40 persons on our one or three-day trips.  Once, we took two buses and 90 people.

“Captain Call,” as some people called him, was in reference to the bearded former Texas Ranger in the TV series “Lonesome Dove.” He always gave each person a timetable for the whole trip ahead of time.

My colleague also brought James Getty, the most famous Abraham Lincoln re-enactor in the United States to Ironton. Mr. Lincoln and I appeared on our local TV channel and told “Lincoln stories.” Mr. Lincoln came out to Lake Vesuvius with us for our “Freedom Festival,” sat around a campfire and ate wood-flavored beans with us. “Captain Call” also brought re-enactors as Robert E. Lee, Ulysses S. Grant and Sojourner Truth to our campus.

Our two most popular history trips were to Gettysburg, Pennsylvania and Richmond, Virginia. We visited Gettysburg three times, 19 sites in Ohio, seven places in Washington, D.C., 10 places in Kentucky, five sites in Tennessee, five places in Massachusetts, one battlefield in Georgia, 22 places in Virginia, three places in Maryland and three sites in West Virginia.

Steve took a busload to the homes or birthplaces of all the Virginia presidents, followed later by a statewide tour of all birthplaces, homes or memorials of Ohio’s presidents. Our leader called these trips “Edutainment” and I called them “History on Wheels.”

There were many highlights on these trips, which people remember. At John Rankin’s home in Ripley, Ohio, we took up the false planks on his back porch and saw the tunnel that led slaves to the barn and his wagon. University of Rio Grande girls’ basketball coach Dave Smalley, OUS employee Bran Kelley and I agreed to scrape and paint a very large 1862 corncrib on a hillside on the Antietam battlefield. We must have done a good job (after no one else would volunteer), because a picture of the corncrib appeared in National Geographic a short time later.

At another time, when we went to Antietam battlefield, we had arranged to meet wit Ken Burns, of “Civil War” documentary fame. I stood about 10 feet from him with the Maryland State Patrol. He gave a great speech and the crowd brushed the patrolmen aside and rushed toward him.

His bodyguards threw him in the back of a limousine and whisked him away for his safety, but he agreed to meet with us,

At Manassas Junction Battlefield, our students tore down the entire Virginia “worm” fence around Henry House Hill and rebuilt it in its entirety. This feat amazed park personnel.

At Gettysburg, we always asked our participants to walk the length of George Pickett’s Charge, a distance of almost one mile. We had them sit down at the base of Robert E. Lee’s statue on Seminary Ridge and I explained to them what we would do, as southerners, in our charge.

I lined them up in units and lines to march toward the Union Army on Cemetery Ridge.  As we started our trek, nearly 100 other tourists fell in line with us.

I would stop at various points and tell them what was occurring on that July 3. When we reached the “High Water Mark of the Confederacy,” I turned and saw all of these people (150-175) mixed in with our students and listening as I told them of Gen. Lewis Armistead’s wounding and later death.

While in Norfolk, Virginia, we were told that the turret of the U.S.S. Monitor that fought the C.S.S. Merrimac had been brought up from the ocean floor (there since December 1862) and it was in a locked building submerged in chemicals to cleanse the ocean debris.

We approached the security guards and told them of our long trip, our love of history and outstanding students. They ushered us in shifts onto a platform and we were some of the first people in the United States to see the pockmarked revolving turret, housing the two Dahlgren 11-inch cannon that fired at the Merrimac on March 9, 1862.

The “Captain” and I always asked our students to do a service-learning project at certain historic sites. Our OUS students stabilized and painted a fence at Gettysburg. Another time, our crew, led by coach Norm Persin, planted dogwood trees along the Cumberland River in Tennessee. Our men dug a water line along the river bank there.

At Petersburg, students poured gravel paths down to the famous “Crater” of July 30, 1864. At Antietam, our students planted 200 trees in the West Woods. I told them beforehand that many groups would be there doing volunteer work and we were allotted so much time. I asked them to break the battlefield record for number of trees planted. They broke the record!

A few times, the park service would ask us to stay longer and do more work. Their promise was to feed all 35-40 of us. The U.S. Interior Department sent a letter to the dean at OUS, praising the students’ work.

Two strange incidents stand out to me. At “Whitehall,” home of Cassius M. Clay (the boxer was named after him), the staff there cooked Kentucky-baked biscuits for entire group at his outdoor kitchen. They said our group was such “model” students.

I asked our contingent to hike to a Virginia Cemetery at Elwood. There was no access for a bus. So, after our walk, we visited the Lacy Cemetery containing “Stonewall” Jackson’s left arm and the southerners did not want the Yankees to get it. “Stonewall” himself is buried in Lexington, Virginia and Steve Call took us there also.

I believe he planned at least 20 history trips for Ohio University Southern. I know of at least 76 sites our students visited at various times. I know that, counting his non-history field trips, Steve Call transported at least 1,000 students and the general public to prearranged sites.

For me, “B.C.” stands for “Before Call.” Our students and the public had only heard of these places in classrooms or textbooks. His precise planning took people from the Tri-State to the outside world where historic events occurred.

Our last project together was a bus loop tour of Lawrence County’s historic places. I researched our past and come up with 20 Lawrence County historic events. Two test runs were made to determine “time and distance.” Steve drove his vehicle at the speed of a bus and I recorded distance and stops between places. The 20 incidents and places were too cumbersome for a one-day trip, so we reduced our stops on the tour.

The “Captain” began to seek sponsorships, securing a bus and driver and planning a picnic at Lake Vesuvius, one of our four later stops. I began recruiting volunteer re-enactors, describing their costumes and hairstyles and writing scripts for their 12-minute on-site presentations to participants.

There was criticism for our fees to pay for the bus, driver, food and pre-trip, pre-printed materials. We just could not generate much local interest and we abandoned our “local dream!” This Lawrence County tour by bus would have been Steve Call’s lasting legacy in this county.

Steve “Captain” Call would accept no kudos or praise for his contributions to American history. He would not let you reward him or bring him recognition. He avoided the limelight!

I attended the memorial service for him, but remained totally silent. Afterward, I realized someone had to recognize his efforts, expertise and accomplishments.

On behalf of Ohio University Southern, its faculty and staff, the general public and our outstanding students, I issue you a heartfelt “thank you.”

You personally made me a better history instructor!

Without a doubt, you enriched the university educations of hundreds of students. I will personally elevate you to the much-deserved rank of “General” and this late accolade is not an abbreviated one!

Bob Leith, a private in your infantry