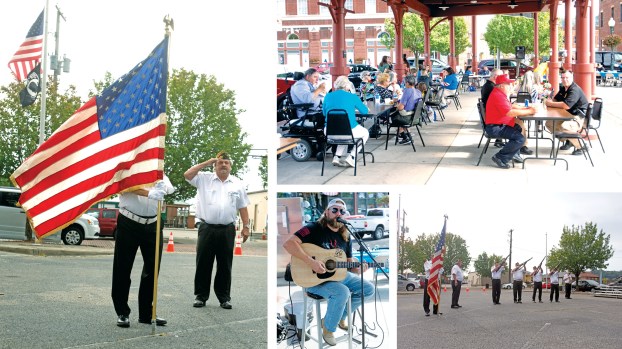 Saluting those who served: Event featured information about veteran services

While the Ironton Market Square is usually the site of vendors selling their local produce or regional bands performing for crowds, but on Thursday morning, people were there to honor those who served in the military and for veterans to look at the informational booths for services they might find useful.

It was all part of Giving Back to Veterans Day, which is now in its third year.

Organizer Kim Maynard, a registered nurse who was a home health aide for years, said she was quite happy with the turn out.

“With the resources that are here, the turnout of veterans being here and the community support, it is a bigger turnout that I had ever hoped it would be this year,” she said.

The Huntington Veterans Administration had tables set up with information about the programs they offer including healthcare for the homeless veterans and the medical foster home program.

As part of the event, Maynard was given proclamations from the City of Ironton, the Lawrence County Commissioners and Congressman Bill Johnson.

“We can’t thank them enough for their service and what they have done for this great country,” said Commissioner Freddie Hayes.

Before Ironton Mayor Katrina Keith called up a local veteran, Don Davidson, who served in the U.S. Army.

“This is my friend,” she said. “Ironton cannot be who we are without people who are willing to sacrifice their lives and that it is what makes America so great, that we have people who are willing to put their lives on the line so that people like me can have freedoms. Sir, we appreciate your service and we appreciate everyone here who has served.”

Country music artist James Cazad, who has been recording in Nashville, played songs to keep people entertained as they ate hot dogs and beans and cornbread.

One of the things that Maynard was happy to add this year was the Mobile Vet Center.

As part of VA outreach programs, the agency equipped a small RV to go around to events that focus on veterans.

Andrew Blake, a VA veteran outreach specialist, takes the Mobile Vet Center to 60-100 events a year. He served for 15 years in the U.S. Air Force and did six tours of combat deployments in Iraq and Afghanistan.

His mission now is to help those who just got out of the military to readjust to civilian life through counseling.

“When you go overseas to a combat situation, the way you think and the way you live while you are deployed has changed you. We try to get you re-adjusted to the civilian life,” he said. Many times, vets will have issues with marriage and family life or communicating with a spouse. “We can help with that. If they are dealing with depression or PTSD, we can help them get as back to normal as they can get.”

Around Blake’s wrist is a rubber bracelet that says “22 A Day,” for the number of U.S. veterans who commit suicide every day.

“Its an issue that is very dear to every veteran’s heart,” he said. “There was a gentleman I was just talking to and someone once asked him if he was ever suicidal. He had one of the best answers I’ve heard — ‘Have you ever talked to a Vietnam veteran who didn’t have a barrel in his mouth?’ That hits home, that is how real this is. No veteran should ever be left behind.”

“We have no waiting list, we can get you in the same day, we take walk-ins,” Blake said.

And there will be a fourth annual Giving Back to Veterans Day next year. Maynard said she is already talking to the Ironton Mayor’s Office, the county commissioners and others about having the event at the end of September 2020.