Step by step by step: Courthouse getting new steps,… 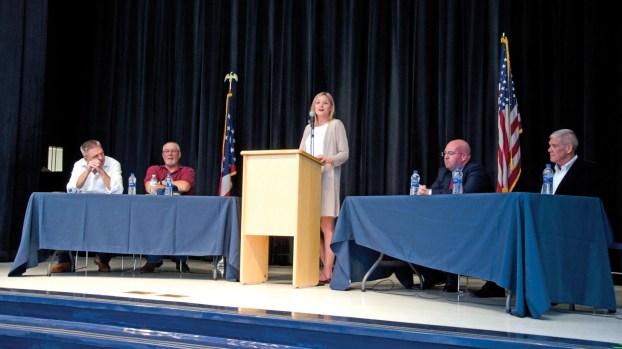 SOUTH POINT — Continuity of government and building on progress was the message from candidates in South Point races on Tuesday night.

The Ironton Tribune hosted its second in a series of candidate forums at South Point Elementary, inviting those running for mayor and council in the village.

In the mayoral race, incumbent Jeff Gaskin was present, but his challenger, Fred Craft, was the only candidate not to attend.

Gaskin, who is seeking a second term, said he has “lived in, loved and served South Point for more than 60 years.”

“Our village is in better shape now than it’s ever been,” he said.

He said the biggest strength of the village was the team it has seen during his term in office.

“The staff, the administrative workers — all 15 are dedicated to South Point and the morale is high,” he said.

Among accomplishments he cited was an $800,000 grant the village has received for construction of sidewalks, which he said will run from the elementary school to the cemetery on both sides of Solida Road.

He also said police and fire departments are well equipped, and pointed to the purchase of a new fire truck, which was finalized Tuesday.

He said “aggressive collection” has led to a decrease in sewer department delinquencies and noted several upgrades to the sewer plant, paid for through grants.

Gaskin also mentioned the village had demolished an “eyesore” house and the land was used to expand White Cottage Cemetery with 50 plots for sale to the public.

“I’m proud to say I’ll be able to be buried in my South Point,” he said.

Gaskin said, if re-elected, his priorities would be the same.

“To be out there and meet people and make sure business is coming to town, and to see that the village runs well,” he said.

Adkins, who is making his first bid for office, said he was originally from Chesapeake, but moved to South Point eight years ago.

“I had the good fortune to marry a South Point girl,” he said.

He said he has worked in financial services and was able to “build a business from absolutely nothing.”

Adkins said his priority is “to bring us together” and the village’s biggest strength was its sense of community.

“And a community is not something that easily found these days,” he said.

The biggest challenge, he said, was preparing the village for further growth, which he said he anticipates a lot of in coming years.

Adkins said he would like to make use of vocational schools to develop more skilled labor and that he would seek to use tax incentives to bring companies to South Point.

“When a company makes money, they hire people,” he said, citing his conservative economic philosophy. “Wealth does not trickle up.”

Adkins said he would like to specify, through this process, that companies receiving incentives agree to hire from Lawrence County and the South Point area first.

Lynd, who is a lifelong resident of the village, said he served for three decades with the village as a worker in the street and wastewater departments. He currently works as a bus driver for South Point schools.

“We’ve done a good job,” he said of the current team. “And we need to keep the village going in the right direction. He said the biggest strength of the village is that it is a “tight knit community” and that they are able to keep utility rates low.

Like all of the candidates, he said infrastructure would be a big challenge in coming years, particularly in devising a plan to replace South Point’s aging water lines, which date back to the 1950s.

Lind said it would be necessary to secure grants for this.

“Other than that, I think we’re on the right track with everything else,” he said. “We’ve got a job to do and we need to keep going in the right direction. Every one of us up here is working together to make the village strive.”

Austin, another multi-decade resident of the village, has 40 years of experience in pipeline work.

As president of a 300-person company, he said he has worked in all facets of that industry, including as a laborer and that his experience brings needed information on engineering projects.

“We’re in it for you,” he said of the current council and mayor, and also cited village administrator Russ McDonald for his service to the village.

He said he has two major priorities — “the safety and security of the village” through police services and “making sure money is spent wisely.”

“You can’t be an engineering contractor and not spend money wisely,” he said.

He urged voters to maintain the current team.

“We need to see a high level of continuity and cohesiveness,” he said. “And renounce any form of negativity, so help me God.”

The candidates were asked about a range of subjects, such as rumors on social media that the village was planning a move to a metered water system.

Gaskin adamantly denied this and said such talk surfaces every election, to which all on stage agreed.

On the issue of the funding levy for Lawrence County Developmental Disabilities, all on stage said they were in favor of it.

Adkins pointed out that it was the first increase in funding LCDD had asked for since 1991.

“That’s been a long time,” he said, and disagreed with those who said the funding does not affect a lot of people.
“If you have a child with developmental disabilities, you would vote yes and urge others to vote yes,” he said.

A third forum, for Ironton and Coal Grove candidates, takes place at 5:30 p.m. today in Bowman Auditorium at Ohio University Southern. The forums are being recorded by Armstrong Cable and will air on television and be posted online in coming weeks.