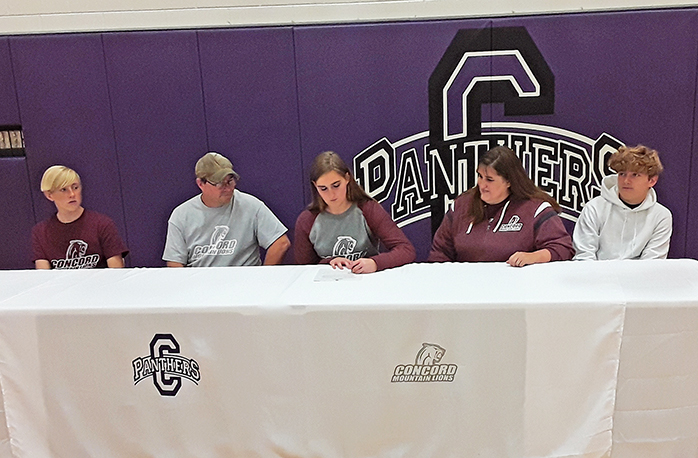 CHESAPEAKE — Maddie McKee does not consider herself a thrill seeker.
But you’ll never convince anyone who has seen her play soccer.
The Chesapeake Lady Panthers’ senior goalkeeper is a “thrill seeker” when it comes to playing her position and she’ll get to add some more thrills and chills next fall after signing a letter-of-intent to play for Concord University on Wednesday.
McKee began playing soccer when she was 8 years old but didn’t start playing goalkeeper for another three seasons and that’s when the thrills began.
“I like the thrill of the diving portion. It’s crazy because a lot of people think I’m crazy for doing that. I do a lot of side tackles. It’s just stuck with me,” said McKee.
“Everybody says it’s so stressful. I don’t do well with stress so it’s crazy how I ended up in goalkeeping in the first place. But God works in mysterious ways.”
By attacking her stress fears, McKee said the experience “has made me  the person I am today and I just don’t think I can live without (soccer).”
McKee picked Concord College over Shawnee State and the University of Pikeville.
“Shawnee and Pikeville were both good schools and I liked them, but it wasn’t a good fit academically,” said McKee.
The depth chart has McKee coming in behind the incumbent but she said Mountain Lions head coach Luke Duffy always keeps an open mind.
“He told me I’d probably start off on reserves because he has a goalkeeper, but she’ll be leaving my sophomore year. But he told me if I beat her out in standings and stuff like that, then I would take first team. I guess you just have to see how it goes then,” said McKee.
Getting the opportunity to play college soccer is a dream come true for McKee.
“I think it’ll be a good experience. I can’t wait. I really can’t. It’s just more competition and I want to play soccer as far as it will take me,” she said.
McKee plans to major in physical therapy.