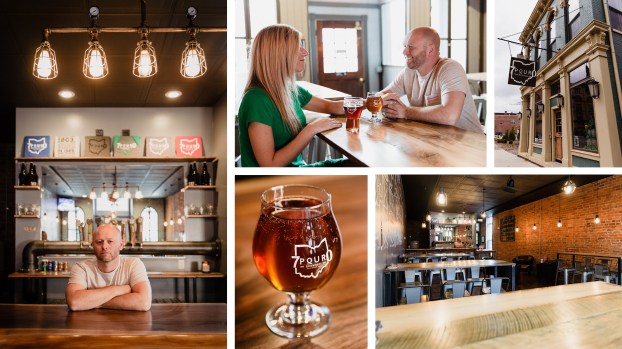 The 7 Pour 0 Brewery opened its doors at 631 Second St. in Portsmouth on March 1 and, for owner Jeff Fannin, it was the culmination of events that began 16 years ago. (Photography by Carla Bentley)

As local as it gets

PORTSMOUTH — The 7 Pour 0 Brewery opened its doors at 631 Second St. in Portsmouth on March 1 and, for owner Jeff Fannin, it was the culmination of events that began 16 years ago.

He was working as a respiratory therapist in Cincinnati when he started brewing.

“I was working the ICU and a buddy of mine — one evening, we didn’t have a lot of patients — he asked if I wanted to go out and have a beer,” Fannin said. “He said ‘We’ll have some good craft beer,’ and I really didn’t have a clue what he was talking about.  I normally drank Bud Light.”

He said his friend bought it for him and told him he would love it.

“The first craft beer I had was an amber ale from Great Lakes Brewery,” Fannin said, stating he did not have the taste for it. “To me, that was an extremely dark beer at the time — now its super light beer. I found it undrinkable, to say the least. I wasn’t used to those kinds.”

Fannin made a proposition to his friend.

“I said, ‘Dude, if you like that, I can make something better,’” he recalled. “I started researching and after a year, I started home brewing.”

He said his first effort was an all-grain batch.

“The first beer I ever made was River Water, which is now one of my staples,” Fannin said. “It turned out absolutely great.  It was more flavorable than a lighter beer. It turned out really good, so I never changed the recipe.”

He said, shortly after that, he started making other beers, first trying kit recipes.

“I tried those and they were horrible,” he said. “I swore I’d never do a kit again and started doing my own recipes and own ingredients. And I kept home brewing for another 15 or so years.”

From Cincinnati, he went to Piketon, then was laid off, before moving home to Portsmouth, where he found more work in the medical field.

He continued brewing with his uncle, and taught his fiancé, Tiffany Hadsell, the craft as well.

“So I was working here local and my boss mentioned possibly people would get laid off and business was slow,” Fannin said. “I thought, ‘Man, you’ve gotta be kidding. Twice.’”

It was at this point that he began considering the idea of opening a brewery.

“Everybody had my beers and liked them, and I’d given them away to friends,” he said. “Other breweries tried to buy them, but I would never sell my recipes. So I started really researching how to open a brewery.”

With Hadsell’s encouragement, he began filling out the paperwork, in detail, providing blueprints and plans.

“It was two months later, I was sitting at work and my cell phone rings,” he said.

The call was from a woman representing Ohio Liquor Control.

She told him he was approved and that they would be coming to do an inspection in two weeks, wanting to know if the facility was ready.

He said, due to rain, all he had was a foundation.

“I said, ‘Sure, but is there any way we can get an extra week?’” he said, adding that they agreed. “I figured I’d better pour some concrete and put the  walls up.”

He said, offering a group of friends pizza and beer as payment, they were able to get everything ready in the short time before the inspectors arrived.

After a thorough check, they granted him approval to start brewing.

Fannin said that a half hour after getting approval, he was also told by his boss at work that he was getting laid off.

“For me, that showed it was meant to be,” he said. “I no longer had a job. So it was all out brewing, as fast as I could and as much as I could — all small batches.”

He said the response surpassed his expectations, with Port City Pub being the first to put his beer on tap.

“Our plan was to stay here a few months, then expand to Chillicothe and Circleville,” he said. “But, in less than a month, we were at the edge of Columbus and Cincinnati and all the way up into Ironton.”

After several months, he said Hadsell asked him if he was satisfied with the business.

“I said, ‘No. I want the tap room. I want to see people enjoying my beer, instead of just dropping them off.’”

With her encouragement, they began looking for a building, eventually renting their location from an old school friend.

It took them a few months to remodel and clean, between the front and the brew system in the back. Then they were inspected and approved to open.

“We finally got up and going and it’s doing well,” Fannin said. “We have people coming in as regulars. They’re amazing. I love just talking to them, sharing and letting them enjoy my beer.”

He said the menu is always changing, with several permanent and one or two new beers added each week.

“There’s always something new, because I do small batches,” he said of the selection, with locally-themed names such as Scioto River Sour, The Mill and River Rat. “I have three new ones brewing. And, it’s not released to the public yet, but I’m working on a cider right now, so that’s coming.”

Fannin, who works at the location full time, describes the atmosphere and how it differs from a bar.

“Most of the day, it’s laid back, like a coffee shop, with music playing,” he said. “In the evening, it gets busier, but it has that same relaxed environment. People bring in families. I encourage them to bring kids in.”

He said they have food trucks on most weekends, but when that isn’t the case, he encourages customers to bring in or order food.

He said they plan to expand, hire additional employees, create an outdoor area for children and eventually offer food on the menu.

He says their slogan is “As local as it gets,” noting that the wood for the kegs is from Ohio, while the metal is from AK Steel. And the woodwork for the bar was done by Wayne Stump of Stump Standards in Portsmouth.

“We have as much from Ohio as I can get,” Fannin said. “Our doors are from Portsmouth High School before they tore it down. We cleaned up and redid them. And my coasters advertise local businesses. How much more local can you get than that?“

Fannin said the area around the brewery reminds him of downtown Cleveland.

“We have a lot of little hangout spots,” he said. “That’s what Portsmouth has now, between me and other local businesses. And you don’t have to leave town to have a laid-back place to enjoy a craft beer. It’s here.”

He said, in the summer, there are concerts and a craft beer festival in the area, all done by locals.

“People are making Portsmouth absolutely awesome, like it used to be, and is again,” he said.