Burton selects UIndy as best college option for her career 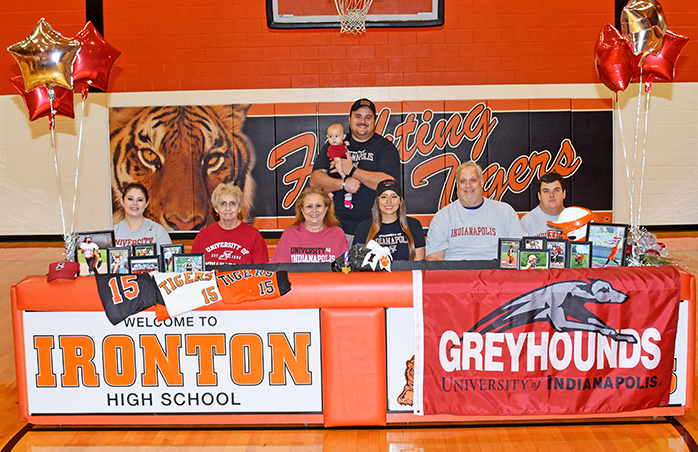 This seems to be the option year for Mary Beth Burton.
The Ironton Lady Fighting Tigers’ softball standout is not only one of the area’s premier pitchers, she is also an excellent position player both in the infield and outfield.
As a batter, she can hit for average or power plus she’s an excellent baserunner.
All those talents presented her plenty of options for college as she was presented offers from several NCAA Division I and II programs.
As a player, Burton will continue to take advantage of all her options. But as for college, she’s eliminated the options and signed a letter-of-intent with the University of Indianapolis Greyhounds.
However, Burton will still have options available even in college.
“I’m going as a pitcher, and my college coach doesn’t actually believe in only (playing) one position like a bunch of D1 college coaches. So, say my freshman year say I’m not exactly starting as pitcher, I have the option to go play different positions like outfield or whatever,” said Burton.
“I like corner like first base and third base. That’s what I’ve usually been playing in high school and travel ball when I don’t pitch. And I also hit. I like to hit. That’s one of my main things other than pitching.”
Getting a chance to play on a regular basis was part of the decision process for Burton.
“I took into consideration what my parents thought, too. They’ve always loved me playing at different positions. I just love the game. I don’t have to be a pitcher. I don’t care to be in the outfield. I don’t care where I go. I just love playing,” said Burton.
Ironton head coach Missy Fields said Burton is a very versatile talent whether it is offense or defense.
“Mary Beth is one of the most talented, best all-around players that I have ever coached,” said Fields.
“Definitely a good pitcher, she and our other pitcher Keegan Moore got us to the regional semifinals last year. She’s our leadoff batter and when she’s on base, she really puts a fire under the other ones and ignites it. She’s very aggressive on the bases.
“She’s a great student. She’s going to make a wonderful doctor one day, but before that I’m sure she’ll have a great career at Indianapolis.”
In 28 games last season, Burton batted .383 with five home runs, 13 runs batted in, 34 runs scored, five doubles, a triple and a team-leading .617 slugging percentage.
As a pitcher, Burton appeared in 19 games and worked 67.1 innings. She started 13 games and had a 10-0 record with 91 strikeouts and only 19 walks. She gave up 57 hits and posted a .2287 earned run average.
Burton said she has been in a velocity program during to help improve her game.
“Mondays, Wednesday and Fridays I go to the gym on my own and lift, and then on Tuesdays, Thursdays, Saturdays and Sundays I’m actually doing a workout for pitchers designed to increase your velocity,” she said.
Burton — who plans to major in pre-med and biochem become a doctor — decided on the University of Indianapolis over Ohio University, Kent State, Toledo and the University of Charleston (W.Va.).
“I actually went in (last) January and did a final visit with everyone just to see where I stood with everyone. I was actually talking when I made my decision,” said Burton.
“UIndy felt like home when I went to visit. I know it sounds kind of cheesy, but it really did. I felt comfortable there, I loved the coach, the program is great, they’ve got to the World Series and they have a good medical program. So, I’m really excited to go.”
The NCAA Division II Greyhounds were 49-17 last season with a 20-6 Great Lakes Valley Conference record.
A native of Circleville, Ohio, coach Melissa Frost has a 624-286 career record including 550-230 at UIndy where she is the program’s winningest coach. Her teams have earned 11 straight NCAA tournament berths, reached the Super Regionals three times and made trips to the World Series in 2009 and 2015.
Frost pitched professional in 1999 in the Women’s Professional Softball League for the Akron Racers.
Burton has been around the program and is confident she can play at the next level.
“I went last year to see a doubleheader against Southern Indiana University. They’re in our conference and we actually won the conference after winning that game. The previous year, Southern Indiana went to the World Series. It was a good game, good competition,” said Burton.
Urbana is in the GLVC and Burton’s current teammate Taiya Hamlet signed last week with Urbana.