‘Serious’ Fannin all business with his signing at Shawnee 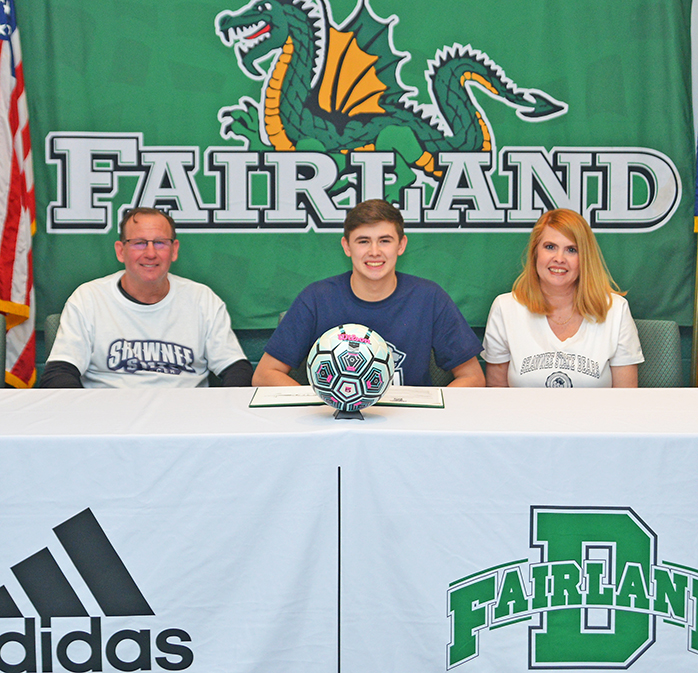 PROCTORVILLE — There is an episode of the cartoon “Teen Titans Go!” that lasts only 30 seconds and is called, “Let’s Get Serious.”
It took longer than that for Mason Fannin to get serious, but once he did it led to a strong high school career in soccer and on Wednesday the Fairland Dragons’ senior was all business as he signed a letter-of-intent with the Shawnee State Bears.
“I’ve been playing soccer my whole life. I started taking it serious in middle school. I started taking it really, really serious. But before that it was like everybody else and we’d go play on the weekends,” said Fannin.
The serious play and search for a college began during Fannin’s junior year and it began with Shawnee State. He also looked at Cedarville and Kentucky Christian.
“Ultimately, I chose Shawnee because it was closer to home and I really like the atmosphere there and I know people from Fairland who go there,” said Fannin.
“And they have a very good nursing program.”
Fannin also ran cross country and track in high school, but he altered his athletic participation prior to his junior year when he dropped cross country.
“I stopped (cross country) and just focused on soccer because it was at the same time,” said Fannin.
Throughout high school, Fannin played striker and a little attacking midfield. He is unsure what position he will play at Shawnee State.
“Mainly, I just play attacking and trying to create goals and score goals. At the (Shawnee State) combine I attended, I played up front like attacking. I prefer playing up top and attacking. I feel like I’m really fast and I like to use my speed to attack and score,” said Fannin.
Although his future landing spot has been settled, Fannin said there is a lot more work to do.
“It’s going to take a lot of hard work. I need to mentally get my game to the collegiate level,” said Fannin.
“I’ve got to learn from the older guys on the team and just work my way up. A lot of it is the mental aspect of it. The homework at the same time.”
Fannin said he has his teammates and coaches Jason Wyatt, Mark Chaffin and Eric Fisher to thank for his success and opportunity to play collegiate soccer.
“My coaches and teammates kept encouraging me, telling me I was good and that I could really pursue soccer at the next level,” said Fannin.
Although Fannin doesn’t expect to start as a freshman, he still has set several goals.
“My goal is to help the team any way I can, whether I play a lot or I don’t play a lot. I don’t have a preference now since it’s my freshman year. Maybe down the road it’ll be different,” said Fannin.
Fannin plans to major in nursing.