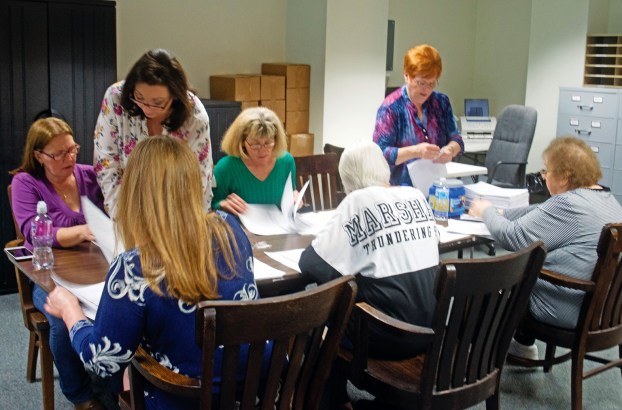 Lawrence County Board of Elections director Catherine Snider, standing, helps election workers as they stuff envelopes on Tuesday. Normally, the workers would be dealing with in-person voting, but, on Monday, Ohio Public Health director Amy Acton shut down the polling places to prevent the spread of the coronavirus. The election has been postponed until June 2. (The Ironton Tribune | Mark Shaffer)

Normally, on a presidential primary election day, the workers at the Lawrence County Board of Elections are deep into helping people vote by checking ID cards and handing ballots.

Instead, they spent Tuesday stuffing envelopes and putting up voting equipment.

It was rather confusing on Monday after Gov. Mike DeWine announced in an afternoon press conference that he was suing in a Franklin County court to have the election postponed until June because of the fear of spreading the coronavirus.

“To conduct an election tomorrow would force poll workers and voters to place themselves at an unacceptable health risk of contracting coronavirus,” DeWine said.

The judge rejected the request, which seemed to end the situation until Health Director Dr. Amy Acton declared a health emergency and shut down the polling places across the state.

Three other states, Arizona, Florida and Illinois, went ahead with their elections on Tuesday.

Toni Bradshaw, deputy director of the Lawrence County Board of Elections, said it was a very hectic Monday, trying to keep up with whether or not elections would be held, since the board had to wait for guidance from the Ohio Secretary of State’s office.

They got a call from the state around 11 a.m. that the governor was going to speak.

“We thought it was going to be an announcement about curb-side voting being available to all voters, if they did not feel comfortable coming into the building,” Bradshaw said. “We were not at all prepared for the bombshell to be deployed on us. We were completely shocked to hear the governor was about to postpone election day.”

At about 10 p.m., the board members decided the decision was final and the elections were on.

Before they could get home, their phones blew up with the news that the polling places were closed.

They got in touch with the precinct managers and told them to tell poll workers not to show up in the morning after all.

So, Tuesday, the workers had to collect the voting equipment and put it back into storage, but only after it was sanitized.

Some workers were stuffing envelopes and processing information since by-mail absentee voting will continue until June 2.

“We have to have all applications by May 26 and then all ballots have to be returned or postmarked by June 2,” Bradshaw said.

There is no more in-person voting until further notice.

“I guess there will be further opportunity for that, but we have not been given guidance on that yet,” she said.