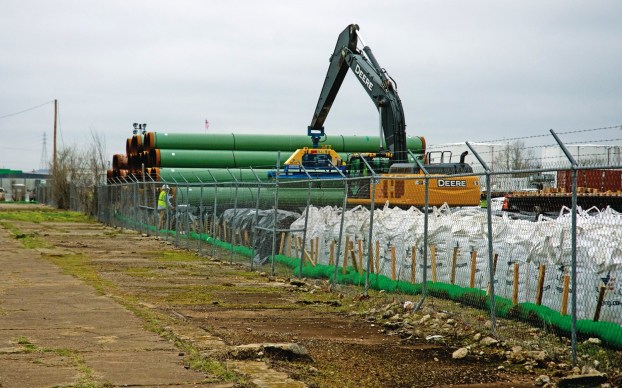 A crane stacks pipes at the former Dayton Malleable property in Ironton on Thursday. The site is now being used by NiSource to store pipes in the white bags for the Buckeye Xpress pipeline. (The Ironton Tribune | Mark Shaffer)

The Lawrence County Port Authority held a virtual meeting Tuesday morning to discuss the effects of the coronavirus on local business, among other items.

Since many important items involved in local manufacturing are imported from areas such as Germany, Italy and China, the coronavirus is impacting industry in the region, said Bill Dingus, the executive director of the Lawrence County Economic Development Corporation.

“Our industries are really concerned because of the lack of raw materials. Here at the Point (Industrial Park), we’ve spoken to two or three of them and although they have plenty of orders, orders keep coming, but they can’t get some of the products needed to manufacture from,” he said.

In response to the order to close dine-in restaurants, the Lawrence County Visitor’s Bureau is ready to help, said Dingus. “We’re opening up our billboard out front to all businesses who want to market carryout or delivery.”

While closed to highway traffic, their office remains open for local items.

Ralph Kline, the assistant executive director of the Ironton-Lawrence CAO, raised a proposal to defer lease payments until 60 days after restaurants renting from the authority reopen, and the board agreed unanimously. This includes Melini Cucina Italian Restaurant and the Trader’s Café, both located in downtown Ironton.

Also mentioned was some former industrial property in Ironton that is being used by TC Energy to store pipes for the Buckeye Xpress pipeline.

“In other news, if you’re seeing all the white bags on the former Dayton Malleable property, those are used to store the pipes. When they start bringing in the pipes for the gasoline, it’s extremely important that we not do any scratching of the coating surface, so pipe will be stacked on top of those,” said Dingus.

Through the project, the company would abandon and replace pipeline and related facilities in Vinton, Jackson, Gallia and Lawrence counties in Ohio and Wayne County in West Virginia. The pipeline would be replaced with larger, 36-inch-diameter pipeline to match a loop segment put in place by another Columbia project, Leach XPress.

In other local business news, he stated, “Liebert at this point are looking at going ahead and working toward a lease on the Ironton spec building. At this point they have confirmed that they are within days of getting an approval on that.”

Related to transit, Kline said, “It is likely that transit will continue to run. We may be called to shift services for disaster relief.” He also offered information about collaboration with the Small Business Association. “The CAO, we’ve been working with the SBA, there’s a declaration from the governor, they put out an SBA survey for businesses and nonprofits who may be impacted and may need to seek assistance through disaster assistance.”