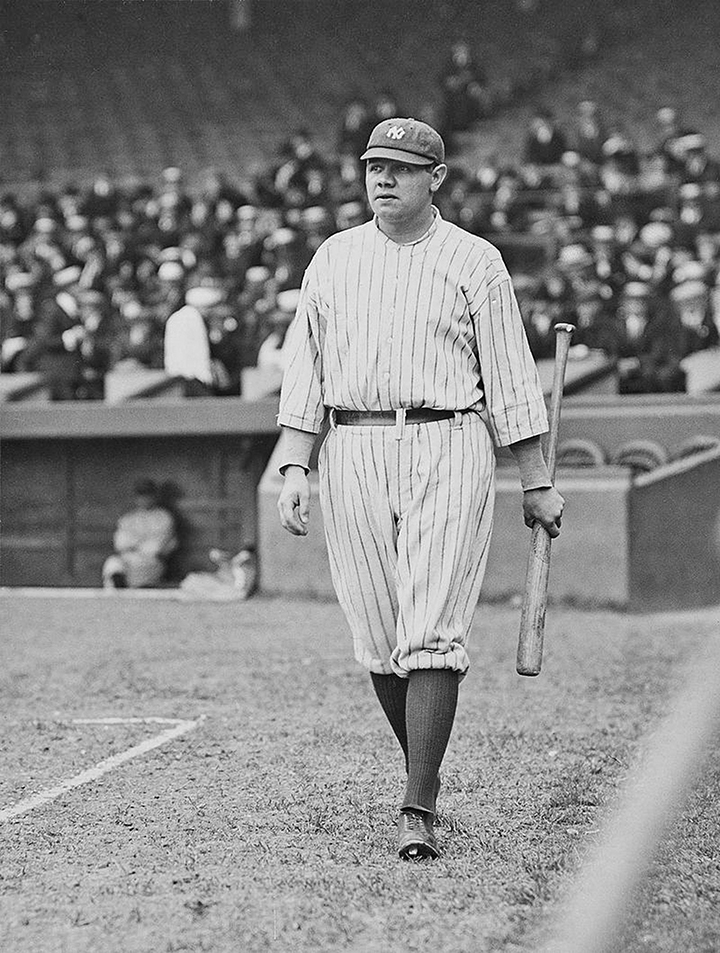 George Herman “Babe” Ruth is seen in his first year with the New York Yankees in 1920. Ruth survived two battles with the Spanish Flu pandemic of 1918. (Public domain photo)

In 1918, an influenza panic much like today’s COVID-19 struck the nation.
The Spanish flu, as it was often called, killed at least 50 million victims worldwide, and 675,000 in the U.S. Then-Surgeon General Rupert Blue summarized how suddenly the highly contagious, fast-spreading and deadly respiratory disease struck.
“People are stricken on the streets or while at work. First there is a chill, then fever with temperatures from 101 to 103, headache, backache, reddening and running of the eyes, pains and aches all over the body, and general prostration,” Blue said. “Persons so attacked should go to their homes at once [self-quarantine], get into bed without delay and immediately call a physician.”
Remarkably, the heroic Babe Ruth beat back the deadly flu twice. As Randy Roberts and Johnny Smith wrote in “War Fever: Boston, Baseball in the Shadow of the Great War,” on the first warm day in May, Ruth – then a standout Boston Red Sox moundsman – spent the day with his wife Helen swimming at Revere Beach, guzzling beer and eating a picnic basket full of sandwiches.
A few hours later, Ruth’s temperature hit 104 degrees. Unbeknownst to him, Ruth had the Spanish flu. Red Sox team doctor Oliver Barney unwittingly administered the wrong remedy, and within hours an ambulance rushed a gravely ill Ruth to Massachusetts General Hospital. Barney had coated Ruth’s throat with silver nitrate which caused a violent reaction that left the Bambino, now afflicted with acute edema, in agonizing pain.
Bosox officials feared Ruth was on his death bed. Since the Red Sox had already lost 11 players to World War I service, the team could ill-afford to lose Ruth, too. But not only did Ruth recover and return to the lineup within a few days, but over the following six weeks in late May and June, he blasted 11 home runs, more than five entire American League teams did during the entire 1918 campaign. The cherry on top of the Red Sox sundae: during the World Series, Ruth pitched two complete game victories, including a shutout against the Chicago Cubs.
Ruth had another round to fight against the Spanish flu. In early October, after the shortened 1918 war-torn season ended, the Bambino’s hometown newspaper, the Baltimore Sun, reported, “The great and only Babe Ruth has fallen victim to the Spanish flu.”
Once again, Ruth battled back and prevailed. But by the year’s end, the flu killed 4,800 Bostonians, and thousands more Americans. By 1919, the flu waning, baseball would face another challenge that discredited the game, the infamous Black Sox scandal. The Chicago White Sox were accused of throwing the World Series to the Cincinnati Reds in exchange for cash payments from known mobsters.
A healthy Ruth, however, racked up eye-popping 1919 statistics. In his last season before he became a New York Yankee, Ruth – splitting his duties between toeing the rubber and patrolling right field – led the league in home runs, runs batted in, runs scored, on base percentage, slugging, on-base plus slugging, and total bases. Without a shred of doubt, Ruth is the greatest baseball player who ever lived.
Sabermetricians Kevin Reavy and Ryan Spaeder, in their book “Incredible Baseball Stats,” calculated that if Ruth were to rise from the dead, return to baseball and strike out 3,187 times, he would still have a slugging percentage above .500. Bonus fact the authors uncovered: Ruth stole home plate ten times, more than Rickey Henderson, Lou Brock and Tim Raines who, combined, totaled only nine.
The moral of today’s baseball tale: America’s game, the national pastime, has survived pandemics and scandal. The coronavirus may have stalled the 2020 baseball season, but as the old adage goes, “This too shall pass.”
–——–
Joe Guzzardi is a Society for American Baseball Research and an Internet Baseball Writers Association member. Contact him at guzzjoe@yahoo.com.