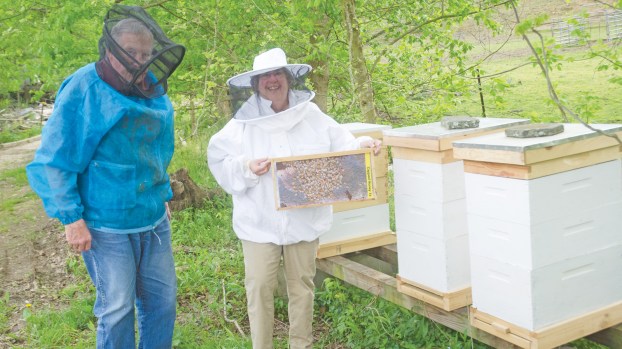 Margaret Reid, along with her husband, Bill, shows a slider from one of their three hives at the Reid Apiary in Wilgus. (The Ironton Tribune | Heath Harrison)

Just a few miles past Symmes Valley High School, she and her husband Bill run the Reid Apiary at their farm on State Route 75.

A retired librarian from public schools, private schools and the Briggs Lawrence County Library System, Margaret said she has been raising bees for 45 years, predating her move to Lawrence County from Virginia in summer 1981.

In fact, she said that while they gave up their cattle for the move, they brought their bees with them.

The couple sells products from the insects, such as honey, candy and honey walnut topping, and maintain three hives.

The vice president of a small chemical company in Huntington, his expertise comes in handy, Margaret says.

“It’s so helpful,” she said. “When we get the chemical formula for something like honey, he knows what they mean.”

He also works with the scouts, particularly Troop 115 from South Point, where he has been a scoutmaster.

The scouts are one of the groups that the Reids show their bees to, in addition to education efforts at local schools and churches. They also maintain an observation hive at Heritage Farm in Huntington.

Margaret said those activities have been impeded by the COVID-19 pandemic. They have been offering porch-side service for their products at the farm, though.

Margaret said, of the two of them, she is the more willing to join groups, and has been a member of the Ohio State Beekeeper Association, where she was named Beekeeper of the Year.

In addition to the bees, they also raise beef cattle on the farm. Margaret said they used to have a dairy cow, but have since focused solely on meat production.

This past week, they have been traveling to get boxes of bees, which they bring down and take to install in hives at farms around the county.

Margaret gives some background on the insects.

Bees, she said, are not native to North America, but were brought over with the early settlers.

“They’re not invasive, though,” she said. “They don’t really compete with anything.”

She said beekeeping is quite an investment now, and the first recorded bankruptcy in North America was that of a beekeeper.

Margaret said the early beekeepers took a while to understand how the hives operate, wrongly thinking that if there was a female queen, then there must be a male king.

She said each hive has one queen for male drones to mate with.

“They are thrown out of the hive,” she said.

Under them are thousands of workers.

“They are sterile female bees,” she said.

These are the ones who gather the pollen, while the queen does not leave the hive.

Reid said a worker bee can only sting someone once, as the stinger pulls out a part of the abdomen and the bee dies shortly after.

“They leave the stinger and involuntary muscles,” Margaret said.

That’s why she said you should scrape a stinger free, rather than squeezing and pulling and releasing more venom. She said the best way to do this is with a credit card and the best treatment is an ice cube.

Reid said one of the responsibilities of beekeepers is to try to keep Africanized bees out of the hives and from taking hold in an area.

Hyped by the media in the 1980s as “killer bees,” they are primarily a problem in the southwest, though Margaret said that a few come through the area.

“They hitch a ride on trucks and boats,” she said, pointing out that as a transportation terminus, it’s something they watch for in Lawrence County.

Five years ago, the Reids began offering classes in beekeeping, and from that, the Ohio River Bee Society was formed.

Their last class took place in November. While they plan to offer them again, Margaret said they considered a virtual option, but she feels a hands-on experience is important to learning to care for the bees.

She said an investment in wooden hives is a long term one and the hives can be used year after year.

“Everything lasts, except the bees,” she said.

She said their hope in doing the classes is to get a new generation interested in beekeeping as a hobby or a business, as many of the county’s former beekeepers have aged out of it.

But she said those who take up it up should be committed.

“I don’t like to say it is hard,” she said. “But I don’t want to see a hive die from neglect. It is a responsibility.”

For more information on the Reid Apiary and classes, contact them at 740-643-2925 or reidapiary@bright.net.