Man arrested after over 150 grams of crystal methamphetamine… 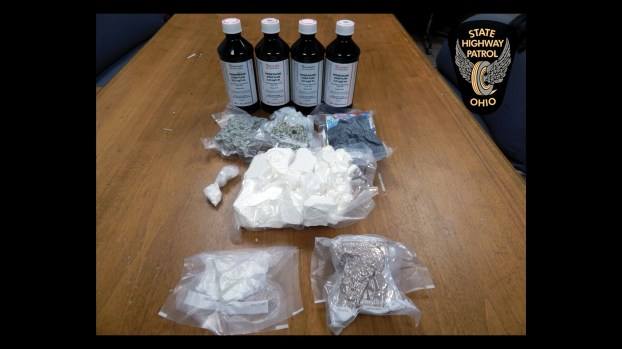 Around noon on May 20, troopers said they stopped a 2020 Nissan Rogue with Georgia registration for a marked lanes violation on state Route 823. Criminal indicators were observed and when the rear passenger made suspicious movement, a bag of oxycodone pills by the passenger foot was revealed in plain view. A probable cause search of the SUV revealed contraband.

The troopers filed felony drug charges against two Michigan men and one West Virginia man after a traffic stop and they seized four bottles of promethazine, 700 grams of cocaine, 200 grams of marijuana, 170 grams of heroin, and 40 grams of fentanyl worth approximately $101,200.

The driver, Dequan Jackson, 28, and passengers, Eddie Brown, 29, both of Detroit, and Rodney Edward, 28, Huntington, W. Va., were incarcerated in the Scioto County Jail and charged with possession of cocaine, heroin and fentanyl, all first-degree felonies.

On May 26, at 11 p.m., troopers stopped a 2020 Toyota Camry with Oklahoma registration for a marked lanes violation on U.S. 23 in Scioto County. Criminal indicators were observed and a Patrol drug-sniffing canine alerted to the vehicle. During a pat-down of the passenger for weapons, troopers seized 65 grams of heroin worth approximately $6,500. The passenger admitted to ownership of the contraband.

The passenger, Donald Davis Jr., 25, of Detroit, was incarcerated in the Scioto County Jail and charged with possession of heroin, a first-degree felony.