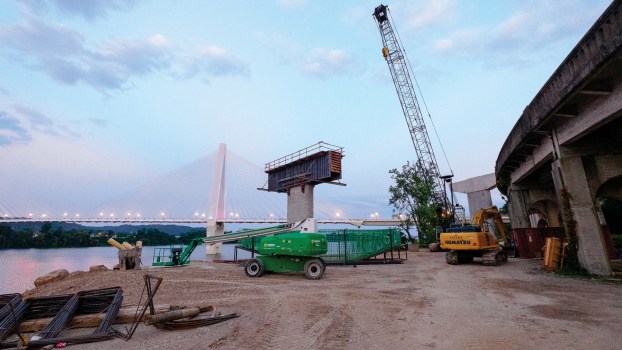 The work on a new “flyover” bridge to replace the 82-year-old bridge into downtown Russell, Kentucky began in May and crews have been removing part of a mountain next to Kentucky Road 750 on the south side of U.S. 23 and building supports for the new bridge. (The Ironton Tribune|Jeremy Holtzapfel)

Scheduled to be open to traffic by late summer 2021

RUSSELL, Ky. — The work on the replacement for the viaduct bridge in Russell, Kentucky is going well, said a spokesperson for the Kentucky Transportation Cabinet.

The work on a new “flyover” bridge to replace the 82-year-old bridge into downtown Russell, Kentucky began in May and crews have been removing part of a mountain next to Kentucky Road 750 on the south side of U.S. 23 and building supports for the new bridge.

“Actually, it is going really well,” said KTC District 9 spokesperson Allen Blair. “The contractor (Triton Construction, Inc.,) is a little ahead of schedule. I don’t know if that will translate getting it done ahead of schedule, but they have made really good progress.”

He said it is going along pretty quickly and they are happy to see that because “they started with an aggressive schedule and they seem to be moving along pretty aggressively to get the earthwork moved and get the bridge piers done,” Blair said.

The earthwork and the piers have to be completed before the construction crews can begin putting down beams and other parts that will hold up the roadway.

“They’ll be moving towards that for the rest of this year,” Blair said, adding that it will probably be early in 2021 before the bridge starts to really take shape.

He said the current goal is to have the new viaduct bridge open for traffic by late summer next year.

“It could be August, it could be September,” Blair said. “But that still depends on a lot of work going smoothly, material supplies being consistent and that we don’t see any problems.”

There will be landscaping work to be done after the new bridge is open that will carry into fall 2021.

The old viaduct bridge has remained open to traffic, which Blair said was part of the original plan and why the flyover design was chosen.

“That’s why we are doing how we are, to maintain traffic and connectivity to downtown Russell throughout the construction process,” Blair said. He pointed the reason that the old bridge wasn’t demolished during construction is that the only other way to get to that section of town is through a railroad underpass, which isn’t adequate for all traffic and especially semi-trailers.

“You wouldn’t be able to have any truck traffic or deliveries or firetrucks be able to get through,” Blair said. “So, it was an important consideration for the city and the community to do it the way we are doing it now.”

The old bridge will be demolished after the new one is open.

The “flyover” design was chosen because it not only replaces the old, deteriorating bridge, but also improves area traffic flow by removing KY 244 from the now-congested intersection of U.S. 23 and the Ironton-Russell bridge.

Both intersections on U.S. 23 — the Ironton-Russell bridge and the new KY 244 — will be T-shaped intersections that handle traffic flow more efficiently with less delays.

The chosen alternative includes a new KY 244 approach at Kenwood Drive north of the existing KY 244-U.S. 23 intersection at the Ironton-Russell bridge.

This new KY 244 will loop westward along part of KY 750 then back to a new flyover bridge across U.S. 23, railroad tracks, and the existing viaduct on the river side to touch down where the old bridge connects to Bellefonte St. in downtown Russell.