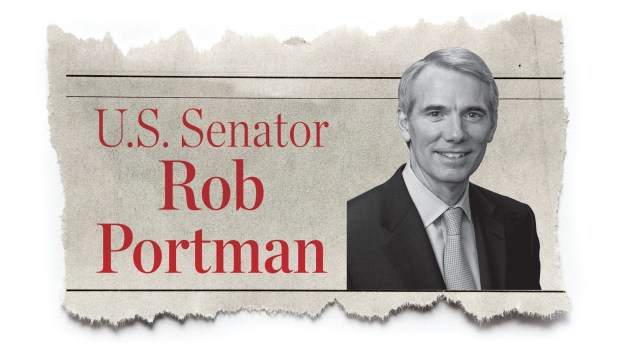 CINCINNATI, OH — U.S. Sen. Rob Portman, R-Ohio, and U.S. Rep. Bill Johnson, R-Ohio, applauded the news on Friday that the Lilly Endowment Inc. has committed the funding needed to install a plaque with the text of President Franklin D. Roosevelt’s “D-Day Prayer” on the National Mall in Washington, D.C.

The World War II Memorial Prayer Act, authored by Portman and Johnson, was signed into law in 2014 and directed the Secretary of the Interior to add a plaque or inscription of the prayer in the area of the World War II Memorial in Washington, D.C. President Franklin D. Roosevelt delivered this prayer to the nation on the morning of June 6, 1944, the day the Allied troops stormed the beaches of Normandy which ultimately turned the tide of World War II. Many consider D-Day to be the single most important moment of the 20th century.

The location of the plaque has been determined to be at the Circle of Remembrance, near the World War II Memorial. The legislation requires that the plaque comply with the Commemorative Works Act and prohibits the use of federal funding.  The project is being led by the Friends of the World War II Memorial and is expected to be completed on the 78th anniversary of D-Day, June 6, 2022.

On the 75th Anniversary of D-Day, Portman led a reading of President Franklin D. Roosevelt’s D-Day Prayer and previewed the placement of a temporary plaque at the Circle of Remembrance inscribed with the words of the prayer.

“D-Day was a day of monumental loss and monumental triumph,” said Portman. “The fate of the free world rested on the shoulders of the brave young men charging onto the beaches of Normandy, and President Roosevelt’s prayer that day helped to comfort the nation in a time of great uncertainty. I’m glad that his words will soon take their proper place in our memorial to the war that changed the course of history.”

“I stand in awe of the sacrifices made by those who fought in World War II – that Greatest Generation — and deeply appreciate all Americans who have answered our nation’s call to defend our freedoms and way of life,” said Johnson. “President Roosevelt had a tremendous weight on his shoulders the morning of June 6, 1944, as he sent 73,000 U.S. soldiers into enemy territory to defeat evil.  He knew the great endeavor our warriors were embarking on would be tremendously dangerous, and that we would need God’s help…so, he turned to God to find comfort and peace for our nation. Now, thanks to the generosity and determination of so many, the plaque bearing his inspirational prayer, “Let Our Hearts Be Stout,” will forever be remembered at the World War II Memorial.”

“The Ohio Christian Alliance would like to thank the Lilly Endowment Inc. for their generous grant that will help make the addition of this historical Presidential prayer a reality at the World War II Memorial in Washington D.C.  We would also like to thank Senator Rob Portman, the sponsor of S. 1044, the legislation that made the addition of the prayer possible,” said Chris Long, President, Ohio Christian Alliance. “The prayer’s addition will serve as a lasting tribute to the 16 million Americans who served us in WWII. President Roosevelt’s prayer articulated the great crusade that was underway to liberate millions suffering under tyranny. He addressed the concerns of those who had family members serving in the war effort, and paid honor to the fallen and those veterans who fought courageously in the conflict. It is fitting that succeeding generations learn of this prayer that was offered at that most poignant moment in our nation’s history.”