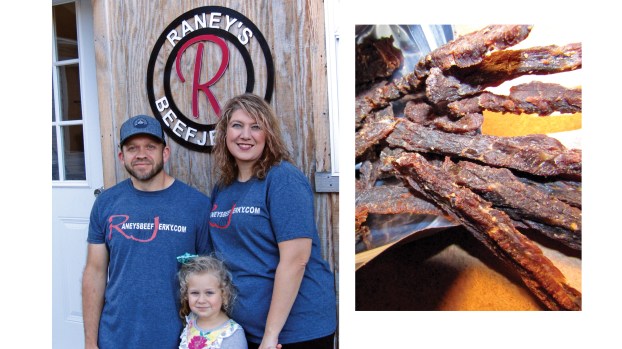 “The whole thing wouldn’t be possible without the support of our family from the very beginning,” Deana Raney says. “It started off as a Christmas present to my husband.”

Scott Raney was given a dehydrator as a gift for Christmas in 2018, from there, the hobby of making beef jerky started to grow into something bigger.

Owners of Raney’s Beef Jerky, Deana Raney and Scott Raney, said that after they took some jerky to work, they had to start selling it.

“We had over 100 messages of people wanting our jerky.” Deana said they knew they had to do something about the number of interested customers, “So we prayed about it.”

What started from a gift in 2018 has now turned into a commercial kitchen built in their backyard where the jerky is produced. The Raneys said that over the past two years, Raney’s Beef Jerky got USDA certified, bigger equipment and tripled ability of production.

Raney’s Beef Jerky has even made its way into stores in the Tri-State.

“The first Friday that we knew it was at Clark’s Pump ‘n Shop in Ironton, it was already sold out.” Deana and Scott both said they were thrilled to see their jerky sold out. “It’s in Oak Hill, Waverly, Chillicothe, Morehead and Lexington,” Deana said. “Even some of those stores are selling out.”

Deana and Scott unanimously agreed that the pandemic has brought negative and positive side effects.

“I would say overall it’s been both, but I would say a lot of good has come out of it,” Scott said. “It gave us a chance to stop for a minute and really observe the direction we need to go in.”
Scott said Deana working from home due to the pandemic allocated more time to get paperwork completed.

“We probably wouldn’t have been able to manage; without us both being so involved in it,” Deana Raney said.

“We have a distributor that has 4,000 stores and looking at possibly 7,000 next year, so the sky’s the limit for this company,” Deana Raney said. “There’s going to be jobs.”

For more information on Raney’s Beef Jerky, you can visit their website or Facebook at RaneysBeefJerky.com. You can also reach this business at 606-694-1054. Owners say the best way to reach them is by Facebook messenger.