Willie Nelson receives COVID-19 vaccine, encourages others to do… 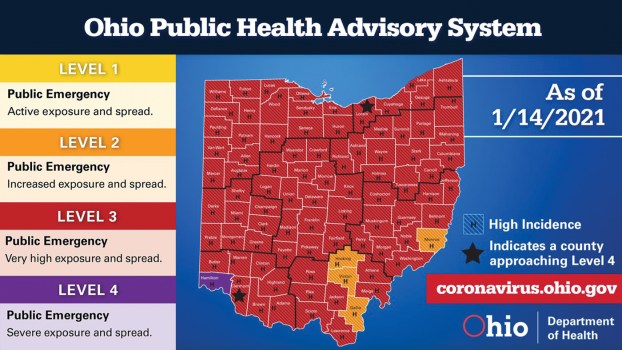 Only one county, Hamilton, was at the highest alert, Purple Level Four on the four-level system, while four counties — Gallia, Vinton, Hocking and Monroe, were at Orange Level Two.

Lawrence County has been at Red Level Three on the system for 14 weeks, since Oct. 8, its second stint at that designation.

“This week, we are noting some small changes in Ohio Advisory System alert map,” Gov. Mike DeWine said on Thursday. “We’re not necessarily seeing a dramatic surge after Christmas and the New Year, but there is a bit of an upswing in our cases.”

Two red counties, Clermont and Lorain, were on a watch list, with conditions showing a possible worsening to Level Four. All counties in the state received an “H” rating for high incidence.

The state also released data on high occurrence in counties. Lawrence County was ranked 12th of the 88 counties, with 896.4 cases per 100,000 people in its population.

DeWine also said new cases per capita at the statewide level have increased since last week.

DeWine said the portion of ICU patients with COVID-19 has gone down slightly.

“ICU use is a lagging indicator, so this is still coming down from our pre-holiday peak,” he said. “However, it does look as though our cases are starting to increase again.”