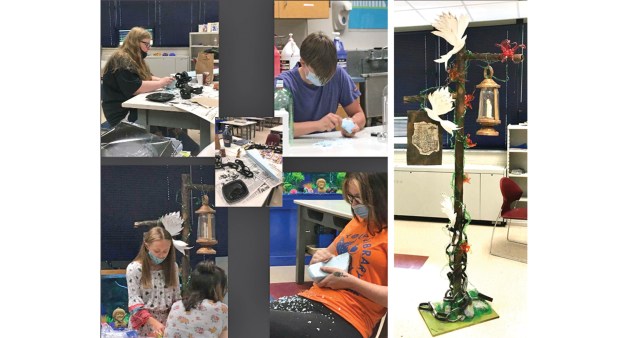 A group of Symmes Valley High School students is being honored by Project First Impression for their art project that used recycled materials to highlight Lawrence County history.

The group of four created the piece, titled “Lighting the Trail to Freedom,” as part of the Project First Impression Recyclable Sculpture Project.

The artwork, which pays tribute to those from Lawrence County who took part in the Underground Railroad, helping those fleeing slave states prior to the Civil War, is on display at the Lawrence County Courthouse.

In their written statement accompanying the piece, the students said they considered many local topics, including the Waterloo Wonders basketball team, the county’s covered bridges and the iron industry, before settling on the Underground Railroad.

“We found a site called Clio,” the students wrote. “It discussed how Symmes Creek was used as a path, along with at least three other trails in the county, for slaves to follow to escape to safety. The Symmes Creek Trail begins where Symmes Creek meets the Ohio River.”

Those using the trail were escaping from Huntington, in what was western Virginia, a state where slavery was in force, to the free state of Ohio. They would follow the path of Symmes Creek to Jackson, Ohio.

“We decided to highlight this trail in the sculpture because this creek passes through many of our properties in the Symmes Valley School District,” the students said.

They spoke of the materials used and the symbolism of the components of the sculpture.

“The chains at the base of the sculpture, made of newspaper, climb the post, representing the chains of bondage that those who were in the suffering of slavery were trying to escape,” they said. “The three doves, made of Styrofoam plates, represent those who have broken the chains of slavery and their spirits being set free. The old sign hanging from the post, made of cardboard, shows the path that was taken for Symmes Creek Trail, as well as the title of our sculpture.”

They said the centerpiece of the work is the lantern, made of newspaper and two plastic two-liter bottles.

“It represents the lanterns that were used to light the way to freedom in the Underground Railroad,” they said. “The vines and flowers, made from plastic bottles, are intertwined with the chains and represent the promise of new hope and life arising out of the darkness of slavery.”

Lawrence County Commission President DeAnna Holiday, who heads Project First Impression, said the contest started in the 2019-2020 school year, which was interrupted by the COVID-19 pandemic.

“We were wanting the students to learn the importance of recycling,” she said, adding that the group hopes to host the contest again, as COVID-19 restrictions have been lifted and in-person learning is returning across the county.
Holliday said she was impressed by the students’ artwork.

“We’re excited to have it on display at the courthouse,” she said. “If you see it, it’s really neat. They worked hard on it.”

Holliday said that she attended PureCycle Technology’s Pure Planet event on Wednesday, in which senior executives, team members and the new PureCycle 2021 intern class cleaned up waste around the Ohio riverbank and County Road 1A.

The company, which is building a plant in Lawrence County, specializes in recycling and converting waste plastic into ready-to-use plastic.

Holliday said Project First Impression is hoping to get more private companies to work with school districts on future projects and that those she spoke with on Wednesday were open to the idea.

“PureCycle was very excited, since recycling is their thing,” she said.