Man charged with 100 counts of rape 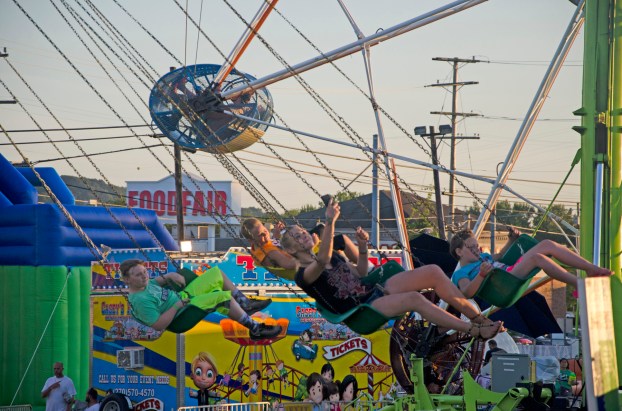 Attendees enjoy the rides on the opening day of the 2019 Lawrence County Fair. The fair is set to make a full return on July 10, following the cancellation after last year’s event. (The Ironton Tribune |Heath Harrison)

ROME TOWNSHIP — The Lawrence County Fair Board met on Monday and made decisions about spending state funds that have been allotted to farm societies across Ohio.

The funds came in two forms, with the first being $50,000 from the Ohio Department of Agriculture. Ohio Gov. Mike DeWine signed legislation into law awarding that amount to agricultural societies in each of the state’s 94 county and independent fairs for operating expenses and any use. Altogether, it totaled $4.7 million in funds statewide.

Chris Collier, vice president of the fair board, said they wanted “to take every advantage” of the opportunity.

“We made a sizable purchase that we’ll get years of use out of,” he said. “ We decided to get a new set of scales for the barn.”

Collier said the scales, which cost $5,000, will be in use for next month’s fair and will be used to weigh in hogs, goats and lambs for 4-H competitions.

He said they have the scales have to be passed and sealed by the county auditor, as they are used for what is considered a consumer product.

He said they will also use the funds to upgrade the PA system on the fairgrounds, while the remainder will go toward operating the fair.

Collier said the state left it open to the fair boards how to spend the money.

“There are no strings attached,” he said.

He said the fair board is also getting another $50,000 in a structural improvement grant from the state.

He said they decided this money will be used for improvements to the grandstand and installing LED lighting in the area used for the derby events.

Collier said the fair board has received this grant in the past, which had previously required matching funds.

“But the state has done away with that,” he said, adding that the past few years have not required a match.

As for the fair, set to begin July 10, Collier said they are putting final touches on the schedule for the event, which makes a full return from last year’s cancellation due to the COVID-19 pandemic. He said vendors, rides and attractions have been booked, as well as entertainment and derby events.

There will also be a benefit dinner for Mark Johnson, a longtime member of the fair board, set for 6-9 p.m. on June 24 at the fairgrounds. The cost is $10 for a spaghetti dinner, with all funds going to support Johnson. Additional donations will be accepted.