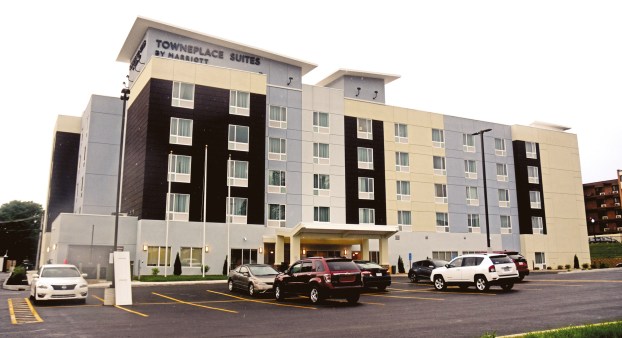 After delays because of the pandemic, the Townplace Suites by Marriott in Ironton is ready to open on Tuesday. It has 76 rooms and is designed for long-term stays. (The Ironton Tribune | Mark Shaffer) 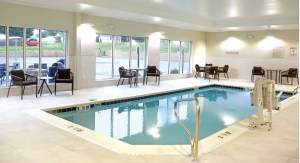 The pool at the new Townplace Suites by Marriott in Ironton. The hotel will open on Tuesday. (The Ironton Tribune | Mark Shaffer)

After months of delays, the new Townplace Suites by Marriott in Ironton will be opening for business on June 29.

“We’re proud of it,” said Mike Holtz, president of MPH Hotels. “It looks great. The workers and everyone did a great job on it. We’re ready to rock and roll.”

The announcement about the second Marriott hotel was made at the Gateway Centre in September 2017 and since then the company building it, MPH Hotels, has had to deal with a lot of things — including a pandemic that slowed construction for a good bit.

Holtz said the construction of the Townplace Suites by Marriott was the longest one in the company’s history.

It normally takes 14–15 months to build a hotel, but it took 24 months for this one, which is five-story building with 76 rooms, an indoor pool and an exercise room.

“It took a long time, but there were a lot of factors, with COVID-19 being the number one factor,” he said. “A lot of supplies were delayed, people were getting sick, people were scared of COVID and not coming in. So, the whole process was dramatically slowed down.”

The pandemic just slowed down the whole supply chain. 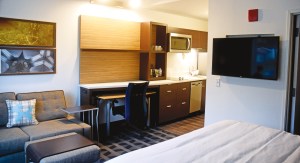 One of the rooms at the new Townplace Suites by Marriott in Ironton. The hotel will open on Tuesday. (The Ironton Tribune | Mark Shaffer)

In fact, they had to wait four months just to get windows for the hotel even though they were ordered six months in advance.

“We always had people working there, it just wasn’t as many as we would have liked,” Holtz said. “It wasn’t anybody’s fault, it is just what happened.

There were just significant delays. I’m ordering windows for my house now and they are telling me it will take nine months to get them in.”

But now, the hotel’s final inspections are all done and “we have our certificate of occupancy, so technically we could open today. Our staff is going through Marriott’s standardized training and our expected opening date is the 29th of this month,” Holtz said. “We are ready to rock and roll.”

The company already owns and operates Marriott Express, which Holtz said is doing well, and that the market can use something like the Marriott Town Suites, which is geared more towards longer-term stays with bigger beds, full-size freezer and refrigerator, smart televisions and stovetop burners, dishwashers, garbage disposals and two room suites.

“It is going to be the only extended stay product in this whole market,” Holtz said. “We are really excited by this.”

Townplace Suites by Marriott is expected to create 30-35 permanent jobs in addition to the 200 jobs during the construction phase.