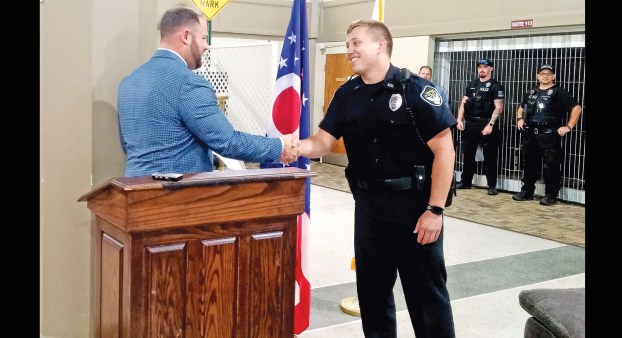 Ironton mayor Sam Cramblit shakes the hand of new Ironton Police Department officer William Borders after he took his oath of office on Wednesday in the lobby of the Ironton City Center. (The Ironton Tribune | Mark Shaffer)

Borders graduated from police academy in 2020

“We expect great things from him,” said IPD chief Pam Wagner before Borders’s swearing in in the lobby of the Ironton City Center in front of his family and fellow officers. He was sworn in by Ironton Mayor Sam Cramblit.

Borders was a jailer and special deputy for the Lawrence County sheriff before joining the IPD.

Wagner said he scored very well on the exam that was part of his application process.

“He scored first on the civil service exam,” she said. “Did very well in his interviews and we offered him the position. Today was his first day.”

Borders graduated from South Point High School in 2017 and then graduated from the Southern Ohio Police Academy in Lucasville in August 2020, which meant odd hours because of the pandemic and the precautions surrounding it.

“It made it a little more difficult, but it was something we had to get done,” he said. The school kept in-person classes, rather than go online. “We just had to space ourselves out and wear a mask. We had a month break and then we had to go to school seven days a week. On the weekends, we went for eight hours instead of four hours. It was weird but we made it through.”

Borders said he wanted to be a police officer “because it was something I always wanted to do, to help people, and I think I would be really good at it.”

He said he was happy to be going on patrol.

“I’m very excited and extremely happy to finally be on the road and do all the things I wanted to do,” he said. “I’m looking forward to learning the city and helping people.”

He will switch between day shift and evening shift until his training is complete.