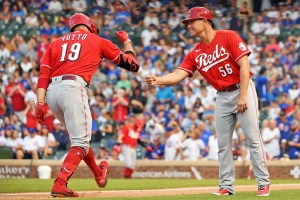 Cincinnati Reds’ Joey Votto (19) getting props from third base coach J.R. House after hitting a home run against the Chicago Cubs. Votto hit two more home runs on Wednesday to tie a team record with a home run in five straight games. Votto now has 19 home runs on the season. (Photo by Quinn Harris/Getty Images)

CHICAGO (AP) — Joey Votto homered twice for the second consecutive day, going deep in his fifth straight game to match a Cincinnati record as the Reds beat the Chicago Cubs 8-2 on Wednesday night.
Tyler Mahle tossed six scoreless innings for the Reds, who beefed up their bullpen again by acquiring right-hander Mychal Givens from Colorado before the game. Tyler Stephenson and Shogo Akiyama each had two RBIs, and Jesse Winker doubled twice and drove in a run.
The 37-year-old Votto is the ninth hitter in Reds history, dating to 1900, to homer in five straight games. It was his 15th career multi-homer game.
Votto launched a 1-1 curveball from Zach Davies deep into the left-field bleachers leading off the second. Votto tagged Cory Abbott for a two-run shot to center on a 3-1 fastball in the ninth, giving him 19 homers this season and seven during his five-game surge.
Mahle (8-3) scattered five hits and walked one in his first win since June 16. Newly acquired relievers Luis Cessa and Justin Wilson followed with a scoreless inning each in their Reds debuts before Ryan Hendrix allowed two runs in the ninth, on RBI singles by David Bote and Ian Happ.
Nico Hoerner and Patrick Wisdom each had two hits for fading Chicago. The Cubs have dropped two straight and seven of 11.
Davies (6-7) was tagged for four runs and seven hits. The wiry right-hander struck out eight but walked four.
Votto’s opposite-field shot put the Reds ahead 1-0 in the second. Winker lined a double to the center-field wall in the third to drive in Cincinnati’s second run.
Stephenson’s long single to the left-field wall in the fifth plated two runs to make it 4-0. Kris Bryant threw out Stephenson at second.
Dillon Maples hit Akiyama with a pitch with the bases loaded in the eighth to force in a run before the Reds scored three in the ninth to pull away.
IN GOOD COMPANY
Other Reds batters to homer in five straight games include current 3B Eugenio Suarez (2018), plus Jay Bruce, Devin Mesoraco, Adam Dunn, Ken Griffey Jr., Johnny Bench, George Crowe and Ted Kluszewski.
PROPPING UP THE ‘PEN
The Reds kept adding arms to their struggling bullpen — and signaled they’re intent on climbing into the playoff hunt — by getting Givens from Colorado on Wednesday for two prospects, RHPs Case Williams and Noah Davis.
On Tuesday, Cincinnati acquired RHP Cessa and LHP Wilson from the Yankees for a player to be named.
The trio gives the second-place Reds relief help as they chase first-place Milwaukee in NL Central. Cincinnati entered Wednesday seven games behind the Brewers and was six games out of a wild-card spot.
The 31-year-old Givens, due to be a free agent after the season, has a 2.73 ERA and 27.4 percent strikeout rate in 29 2/3 innings for Colorado.
“We looked at all three as potential upgrades to our bullpen right now that can help us for the rest of the year,” general manager Nick Krall said.
TRAINER’S ROOM
Reds: Krall hopes right-handed relievers Michael Feliz, Lucas Sims and Tejay Antone will return within the next month. Krall expects Feliz (right elbow sprain) back in a week to 10 days, and Sims (right elbow sprain) in about two weeks.
Cubs: SS Javier Báez (bruised heel) was held out of the lineup for a third straight day, but was available off the bench. … RHP Jake Arrieta (right hamstring tightness) will throw a bullpen Thursday. The Cubs placed the 2015 NL Cy Young Award winner on the 10-day injured list July 7 after he went 0-5 with a 9.67 ERA in eight starts following a win at Pittsburgh on May 25.
UP NEXT
Reds RHP Luis Castillo (4-10, 4.12 ERA) faces Cubs RHP Alec Mills (4-3, 4.55) in the series finale Thursday afternoon. Castillo is 3-2 with a 1.71 ERA in his last 10 starts after going 1-8 with a 7.22 ERA in his first 11 outings this season.