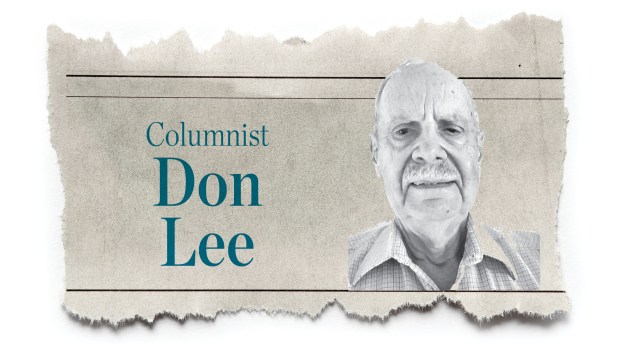 EDITOR’S NOTE: Don Lee is taking a break from his column this week. The following is a piece that originally was published on Oct. 10, 2018:

The use of trainers for Army Air Corps and later, the Air Force have been interesting to me and I hope it will be to you also.

I guess the first trainer was the Wright Flyer being demonstrated by Orville Wright at Fort Myers Army base near Washington, D.C.

Thomas Selfridge, a dirigible pilot, was chosen to fly with Orville.

They were making circuits around the Army base and on the fifth round, the propeller broke on one side.

Orville did what he could to recover, shutting down the engine and was able to keep the plane from hitting the ground in a vertical dive.

The plane was destroyed.

Orville hit a number of wires, but Selfridge hit a strut and suffered a brain injury.

He died as the doctors were trying to save him.

The damaged propeller was preserved and can be seen at the Air Force Museum near Dayton.

There is a National Guard air base named for him in Michigan.

He was the first service member to die in an airplane accident.

The WWI trainer used by both the United States and Canada was the Curtis JN4.

From the initials, it came to be known as the Jenny.

Although for training purposes, some were outfitted with machine guns, but it was never used in combat during WWI.

I can’t remember for sure, but I believe that our WWI ace, Capt. Bill Lambert, learned to fly in it.

I know for certain that he bought one or more after the war to barnstorm across the country.

He wrote a book about his exploits in the Jenny, especially with the women.

I remember when he gave me the book, he took me aside and said, “Don’t let your wife read this.”

Next, I’ll just say a few words about the Stearman Kaydet before I run out of room.

It is the only Air Force trainer that I have actually flown.